Our project Bench Workspace gives students a space to enjoy nature while under the shade of a tree. The desk my partner and I designed attaches to a tree, creating an outdoor work space on the school's lawn.

Why use your lap as a desk when you can have a fold-able bench that transforms into a work space? The primary use of (project name) is to provide a peaceful place to sit outside and work. Our Project can be used by students who have a free period in the day and would like to finish  homework or study.

The desk has hinges in it so it can be used as an arm rest and a desk. Give several paragraphs of text explaining what worked and didn't work in your model. Tell us about your different design iterations and why you went with the tree attachment. What engineering challenges did you face?

Although we haven't completed the final product we believe that once we finish the full scale it will offer students a great option for  studying and quietly and efficiently outside?.

Our project is for students who want to do work outside in a workspace that has a desk for your homework or projects or you just want to go outside and enjoy the weather. There is now a place for that with our Bench/Desk Workspace.

Our mechanism is a bench that is used as a desk, but why have a lap as a desk when u can have a foldable desk. The desk has hinges in it so it can be used as an arm rest and a desk. The primary use of our device is to be able to work outside where there is a quiet place to work, working outside while everyone is in class makes it peaceful to sit on a bench that has a desk instead of using your lap.

As of now we have not tested nor finished our model yet, but once we do finish I believe it will turn out great and will be used a lot for many reasons, and will be a good add on touch for availability for studying and or working quietly and efficiently.

The Ramp Shade is designed to extend and cover the area on the side of the school's pedestrian bridge that connects Perkins and the Academic Commons.

Foster, an academic building that used to be a popular hangout spot, is no longer accessible to students. A ramp shade would give students a much-needed place on campus to hang out or do homework outside. The aim of the Ramp Shade is to encourage students to study outside of the classrooms and in the fresh air. The Ramp Shade has two states which are full extended for shade and the other is tucked away under the bridge for storing it. We have to states because our shade is not meant to go through really bad weather so when weather is bad is can be tucked away.

This project started with a cardboard replica of what we thought would be such a great model. We couldn’t get it but unfortunately, the mechanism that moves the shade up and down did not work. This did not work because of the way the strings were attached the shade would not be able to go up. Also, it was not deployable to it could not be tucked away.Then we made another replica out of cardboard, this time we got help with what our shade could be. We decided to go with origami because we were told it would be more bendable and easier to tuck away.  We began researching origami and types of folding techniques could be used for a shade. Although it was challenging and time-consuming, we started to learn how to fold the origami shade. Once we got that we tried connecting it to our model. We still didn’t know how we were going to make this retract and expand. We thought maybe running a string through it would work. Then we realized that the origami wouldn’t just stay up on its own.

The next task our team worked was a structural frame for the origami and the connections between components. Once we laid out the finalized parts in Rhino, a CAD software, the frame was ready to be laser cut. We also laser cut fabric to fit in each frame, creating the shade. Then we created tape hinges on the cardboard model to experiment with the folding mechanism. We to show that. Then we moved on to laser cutting a wood frame and the fabric sections. Metal hinges were then added to the frames to connect them and allow the shade to fold.

The origami is one that took a long time to research and figure out what to do. To finally realized that we didn’t need to just be folding paper that the origami needed to replica a frame was hard to get to. Once we got there is made it a lot easier to work with and see where to go from there. This project in the end would be great for student's and faculty. It would be easy for anyone to deploy and a great addition to the campus.

During the first week of this class, the studio was tasked with designing a deployable object that would be useful and help improve school campus. This was challenging because the campus is already really pretty, especially outdoors. As students, we never really get to enjoy it as much as we could because we are in classes all day. And with the new schedule, we do not get many breaks. This triggered my idea: to design an outdoor learning environment.

The main goal of this project is to create a learning environment that stands out from the traditional. From the start, the classroom needed to be a space that was outdoors, but the challenge of designing an outdoor classroom is that it needs to be protected from uncomfortable features such as extreme temperatures, bugs, etc.The idea of clear walls  fits the goal of this project. Over the course of the semester over five different models were designed. Although some did not work at all, the experience was taken and learned from for the next model. After the nearly-finalized model was not working, a guest coach came in. The models all had difficulties deploying and having a second use. All models were presented to her, and she said that the first was the best. A decision was made to go back to this one because its simplicity made it more functional and stand out.

The Curvy Classroom works with the same mechanisms of a garage, but would have to be attached to a larger structure. Because there are many open spaces on campus where this could be placed, we propose attaching it to a tree. This would allow one side of the structure to remain on the ground, while the other side can raise for shade or remain the same. This structure can take on many different forms and this feature is especially useful when it is time for storage. The panels can be folded on top of each other for a compact and easy pickup.

Since the beginning of this project, it was apparent it was going to be a challenge. We struggled a lot throughout this, but with the help of teachers and other guides, the idea progressed. The greatest difficulties were figuring out how the structure would be able to deploy and what its second use would be. Lists of objectives helped my partner and I overcome these challenges. Once the digital model of the final was completed, the project finally came completely together, but there is still other details to work out. In conclusion, having an outdoor learning space might have been hard to make, but it could help change the learning environment for students on campus.

In essence, this project is a deploayble seated area. It gives students a place to eat or study under the roof of a pavilion. When it is deployed, the benches go up and are hooked to the side structure. The seats act as a shaded pavillion that protects from adverse weather or from sunlight.

Many protoypes were made before the main one. Four or five iterations of the project were made to get to the final product. Figuring out what and where things would work impacted the project greatly. Having the connections of the hinge with the seats was not working so it took another approach. A long wire to hook through the chairs was used to get it connected. The rest was easy and to the point.

The project mainly used cardboard at first because that was the only thing that would work. Ducttape was used to get the whole thing connected. Then, it started to get advnaced. The project got into the wood industry and the pieces started to work. The connections of the chairs to the roof went smooth with wood and the pulley system is something to admire. It works full proof now and the materials were wood and screws.

This semester, we have gone through many different steps and phases that have led us to the Book sack Rollercoaster. Our Book sack Rollercoaster is made up of numerous pieces of PVC pipe that range from straight, curvy, steep, and gradual pieces that are bound together. These pieces create a track connected to the staircase railing allowing the book sacks to travel down the stairs in a smooth, artsy transition.

Our design of the Book sack Rollercoaster has gone through quite a process itself. We originated in the idea of having a telescoping chute that would run from the top of the stairs down to the bottom, but this idea soon failed because it would be hard to control the slope of the chute being that each box fits into a larger box above it creating quite a steep slope. This, as well as the size of the first and last boxes, became issues. Because of all of this, we abandoned the idea and eventually came to this idea of PVC pipes creating a track for the book sacks to follow down to the bottom of the staircase. The pipes would be mounted to the staircase and use gravity and the designed slope to transport the book sacks in a smooth and artistic way.

This Book sack Rollercoaster will allow those who are injured and unable to carry their own book sacks to have an easier alternative than getting another person to carry it for them. This will prove to be very helpful for not only those students who are injured, but also for other students, teachers, or visitors who are carrying heavy items, have their hands full, or are simply just lazy. Being that we are in a place where everyone lugs around heavy book sacks, having a beautiful, artsy design will not only add charm and fun to the boring stairway, but will also serve as a very convenient system to transport items for in multi-leveled buildings.

The joints on our project are top notch and have passed our nine star reliable test. It has a guide rail in order for the bench back to never fall off when it is in transition into a table. Our  bench desk is top notch and has high grade wood in all parts of the product and is available in multiple sizes for all of your working needs. 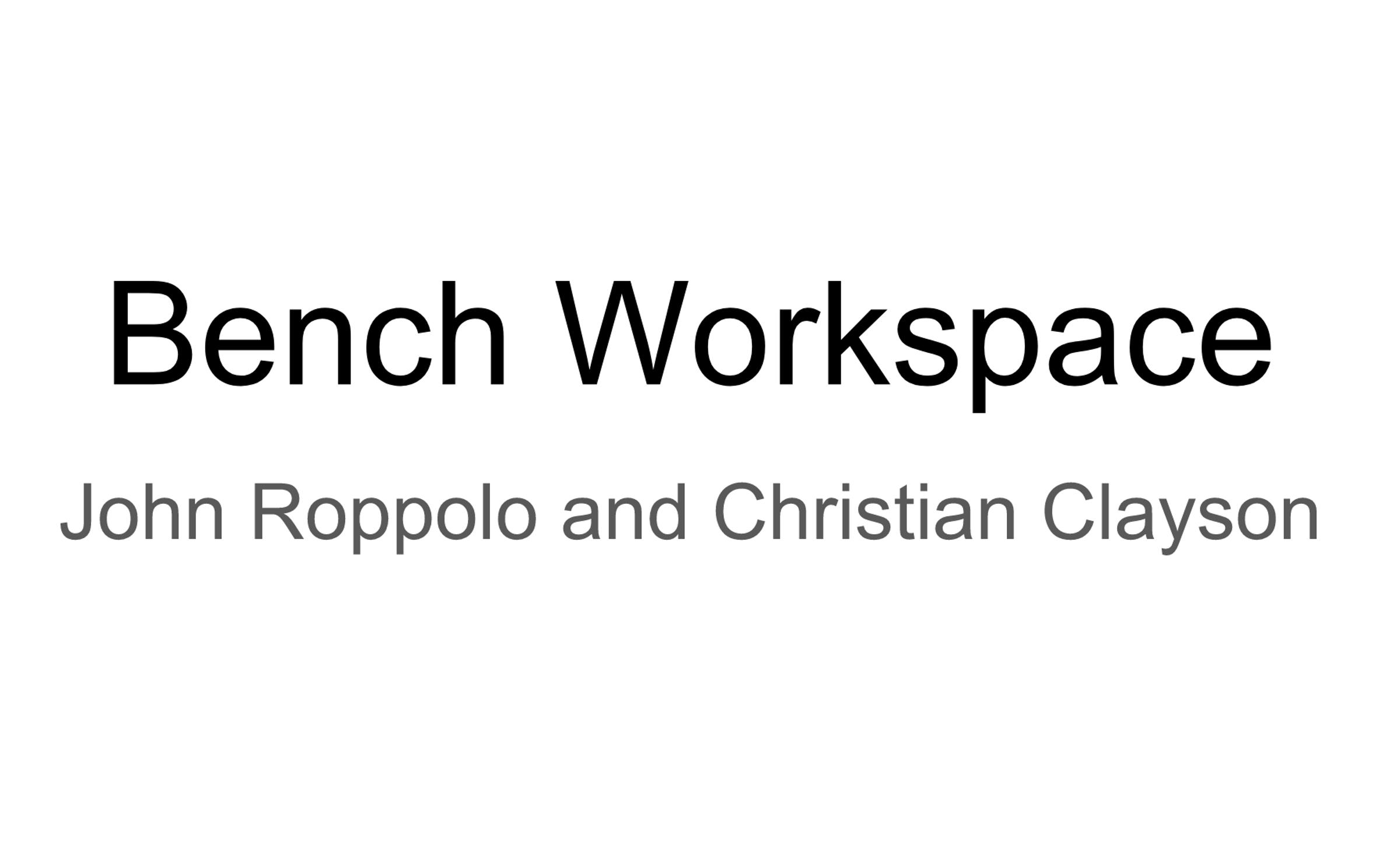